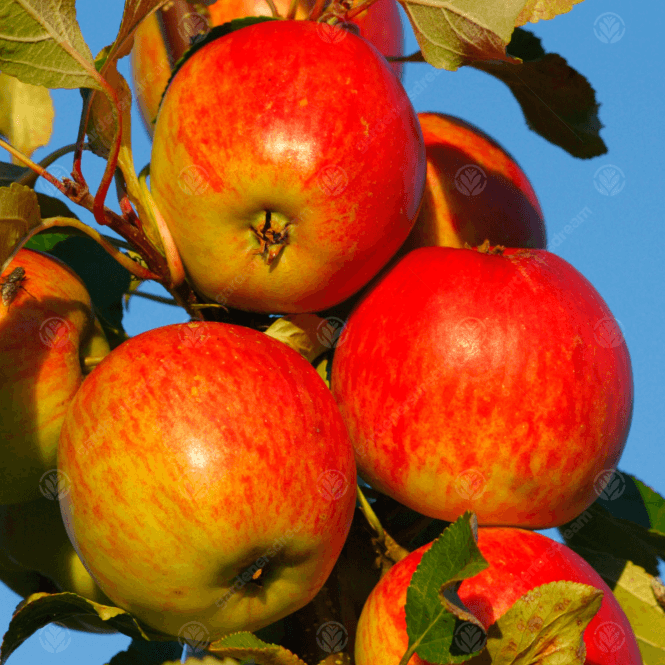 The Malus domestica ‘Red Falstaff’ is a late season dessert apple that is orange-red with a crisp, juicy flesh. The Red Falstaff store well and may be kept in the fridge for a couple of months, until about Christmas.

The taste of home-grown apples outdoes that of shop-bought variations.

The Red Falstaff is a natural genetic mutation of Falstaff, which is a cross between James Grieve and Golden Delicious. The apple is very juicy and is perfect for home-juicing, much like its parent, James Grieve.

MM106 (Semi-Dwarfing) are suitable for all forms except standards. The apple trees are tolerant of various soils like grass orchards and poor soils. Widely used rootstock, but not for small gardens. This tree will begin fruiting after three or four years with an ultimate height of between 3-4m.

M26 (Dwarfing) are good for spindle bush, espalier and ideal for containers. Typically starts fruiting after two or three years with an ultimate height of between 2.4-3m.

M27 (Extremely Dwarfing) are suitable to grow in small gardens where the soil is fertile. Plant in weed & soil-free grass and water during hot seasons. The tree will start fruiting after two years with an ultimate height of just under 2m.

Be the first to review Red Falstaff Apple Tree. Write a review