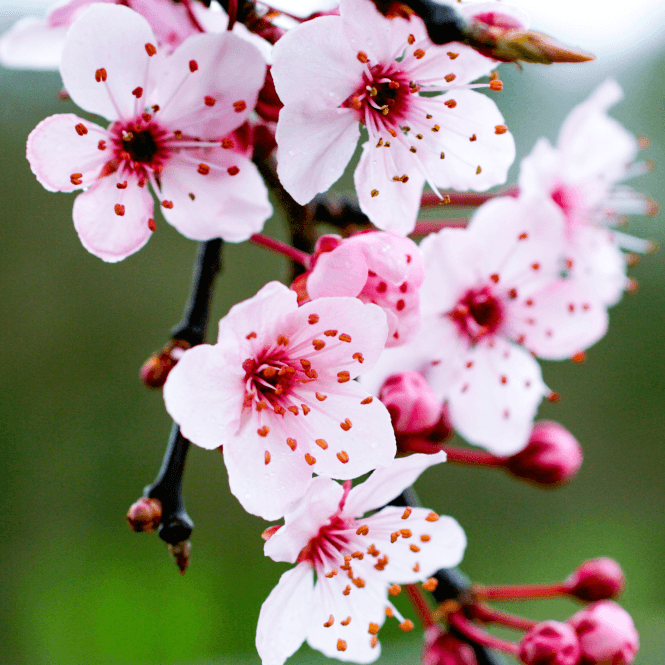 The Prunus cerasifera 'Nigra', or the Black Leaved Plum (Blood Plum) inspires with its dark red, glossy leaves and the dark brown-red bark. It grows into a large shrub or small tree of 5-7 meters in height with upright habit, forming around crown. As the blood plum grows older, it shows romantic overhanging. It produces numerous flowers and fruits, however, the ornamental value of the plant is higher than the value of the fruits.

The alternate and elliptical, deciduous leaves of Prunus Nigra shine with striking colours of dark reddish-brown to black-red. Its bark is reddish brown to blackish and shiny, sometimes it is thorny. The warm colours create beautiful contrasts, creating a beautiful spectacle in private gardens or in public parks. In March - April, bright pink flowers envelop the black leaved plum, followed by red fruits in Aug – Sep.

Prunus Pissardii Nigra has no special soil demands as any general garden soil is enough for the plant to thrive in. However, the tree prefers moderately dry to moist nutrient-rich soils and it grows best in a bright and warm location with plenty of direct sunlight.

A thorough pruning over the winter ensures that the Prunus Nigra branches strongly and forms a well-branched dense crown. It is a winter-hardy plant that thrives without difficulty.

It is often planted in gardens and parks due to its striking flowers, red foliage and sturdiness. Black leaved plum stands out in contrast with other green plants as a single specimen or even in groups. It also forms beautiful hedges where birds like to build their nests.

Be the first to review Prunus cerasifera Pissardii Nigra Tree. Write a review