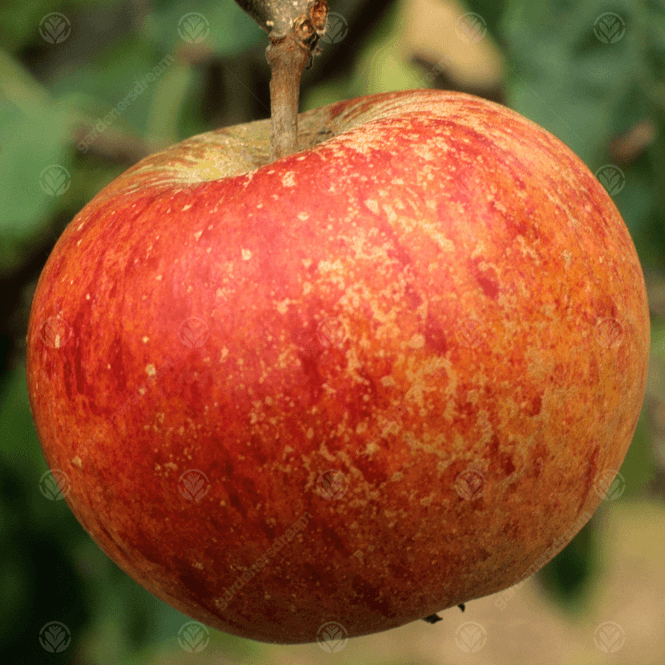 Cox's Orange Pippin is often referred to simply as Cox, and is known in Britain as the sweetest, crispest and tastiest apple! The apples are medium size, with a vibrant orange-red colour, which deeps to bright red. The fruit is mottled with patches of golden-russet. The flesh is yellow-white in colour with a fine grain and loads of juice. You will easily identify a Cox’s Pippen – give a ripe one a shake and listen for the rattling sound that the seeds make, they are only lightly attached to the flesh and free to move around.

This is the ultimate dessert apple. It can eaten straight off the tree or sliced and used to make a scrumptious buttery caramel-topped Tarte Tatin. Cox's Orange Pippin is used in the production of cider, where it is blended with other apple varieties.

Malus domestica 'Cox's Orange Pippin' thrives in fertile, well-drained soil and enjoys full sun. It can however, be temperamental and is less suited to the Northern regions of the country. It is a self fertile tree, making it ideal to be planted alone in a smaller garden. It can also be used to cross pollinate other apple trees.

Cox’s Orange Pippin is offered as a rootstock MM106, semi-dwarfing, which is tolerant of a range of soils. This is the most widely used rootstock. Plant with a spacing of 4.5m between the rows. When left unpruned, the tree will reach a height of 4-5m.

MM106 (Semi-Dwarfing) are suitable for all forms except standards. The apple trees are tolerant of various soils like grass orchards and poor soils. Widely used rootstock, but not for small gardens. This tree will begin fruiting after three or four years with an ultimate height of between 4-5m.

M26 (Dwarfing) are good for spindle bush, espalier and ideal for containers. Typically starts fruiting after two or three years with an ultimate height of between 3-3.5m.

M27 (Extremely Dwarfing) are suitable to grow in small gardens where the soil is fertile. Plant in weed & soil-free grass and water during hot seasons. The tree will start fruiting after two years with an ultimate height of around 1.5-2.5m.

Be the first to review 'Cox's Orange Pippin' Apple Tree. Write a review