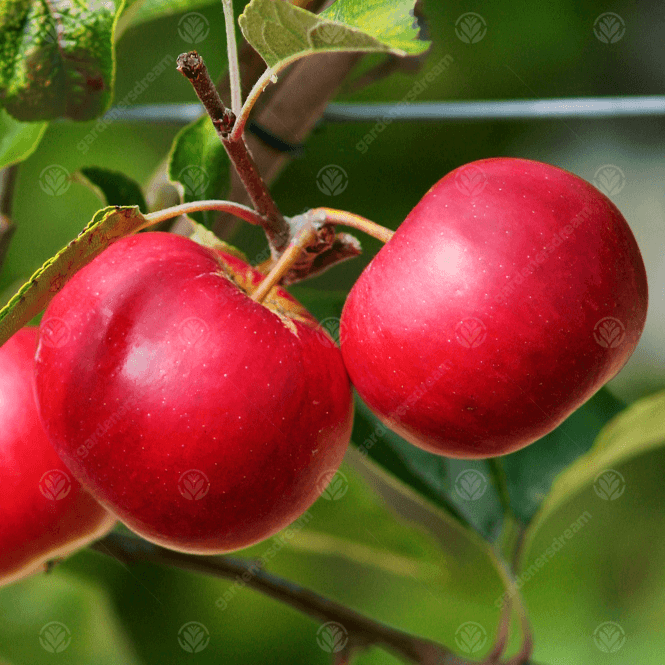 The Malus Domestica ‘Scrumptious’ is a mid-season dessert apple that is red with an intricate, aromatic, honeyed flavour. Scrumptious is a self-fertile, disease resistant, good pollinator and produces heavy crops of red apples, even on young trees.

Apples are one of the easier fruit trees to grow and are increasingly becoming more popular with gardeners. They are medium-sized deciduous trees with flashy Spring flowers and ornamental or edible fruit in the Autumn.

Scrumptious does not require a pollination partner to produce a good crop of fruit as it is self-fertile. Apple trees benefit from growing in a slightly sheltered, sunny area, as the blossom will attract a large variety of pollinators, as well as the sun, will help ripen the fruit.

They store for a particularly short time after they have been picked compared to some other apple trees, they will keep for roughly one or two weeks at most.

The Malus Domestica ‘Scrumptious’ was introduced in 1980 by Hugh Erman in Kent, this man is also responsible for breeding other popular varieties such as Red Devil and Hertfordshire Russet. The parents of Scrumptious are Golden Delicious and Discovery.

MM106 (semi-dwarfing) are suitable for all forms except standards. The apple trees are tolerant of various soils like grass orchards and poor soils. Widely used rootstock, but not for small gardens. This tree will begin fruiting after three or four years with an ultimate height of between 3-4m.

M26 (dwarfing) are good for spindle bush, espalier and ideal for containers. Typically starts fruiting after two or three years with an ultimate height of between 2.4-3m.

M27 (extremely dwarfing) are suitable to grow in small gardens where the soil is fertile. Plant in weed & soil-free grass and water during hot seasons. The tree will start fruiting after two years with an ultimate height of just under 2m.

Be the first to review Scrumptious Apple Tree. Write a review