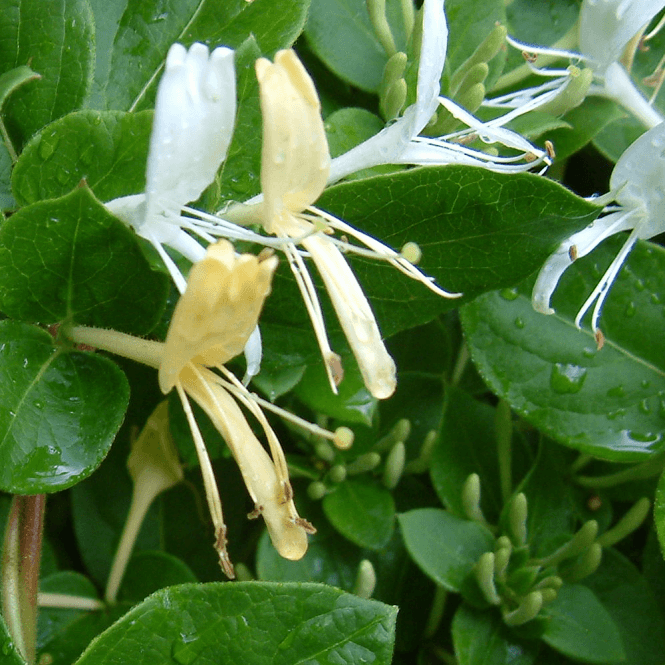 Flourishing Season: Flourishes in spring and summer, flowering in May - August

Lonicera Japonica Halliana, as the name suggests, is a Japanese climber plant that is very vigorous in growth. This trailing or climbing evergreen shrub is perhaps the most popular of Loniceras because of its highly fragrant flowers. It is an excellent alternative to the English Ivy but mind it, its growing power is explosive. At maturity, it will reach a height of 9 metres, taking over any plant that comes in its way.

This Japanese Honeysuckle blooms masses of fragrant pure white, tubular flowers that will turn yellowish as they mature. This vine has a pretty long flowering period that can last from May-June until the first frost. The flowers are followed by small round black berries that add ornamental value to the shrub. Its oval dark green leaves look glossy and very attractive.

Lonicera Halliana prefers its upper part or head in the full sun but its roots in the shade. Avoid a full shady spot otherwise, the plant’s lower part will turn bare. Plant it in a rich fertile soil that is moist and regularly drained. It develops a strong root system that has to support a big and heavy vine on top, so ensure proper caring of the roots.

Apply a layer of mulch made of well-rotted compost around the base in early spring annually. This climbing vine is considered rampant in its growth habit and requires a lot of maintenance and care. Cut overgrowing shoots until the base and trim once again in winter to control its invasiveness.

Plant this Japanese Honeysuckle at a location free of nearby plants, as it a tendency to take over and literally suffocate other plants. Use it as a groundcover or train it along with a wall or trellis.

Be the first to review Lonicera japonica Halliana. Write a review