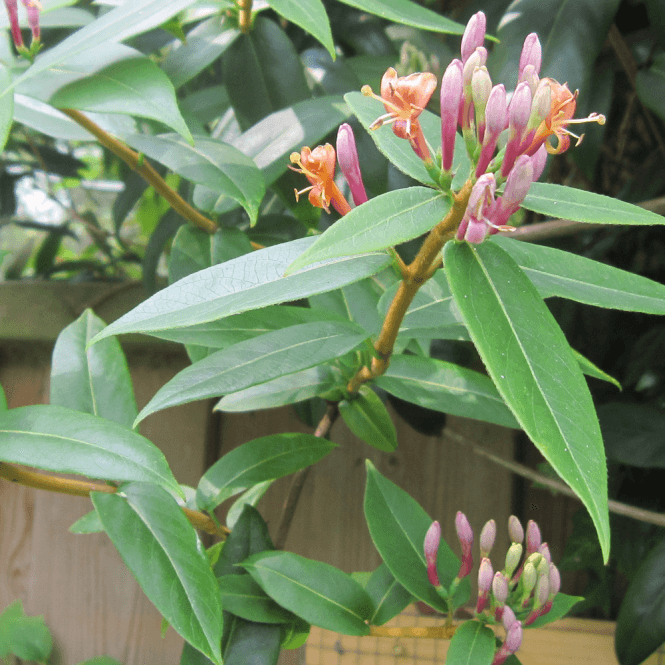 Lonicera Henryi is an evergreen climber shrub that is an excellent alternative to the English Ivy. This vigorous climber will reach a height of 9 metres at maturity, twining and climbing using supports. It features large lance-shaped mid-green foliage that looks very glossy when wet. Also known as Henry’s Honeysuckle, this vigorous vine originally comes from the forests of China. It is a giant climber, perfect for covering walls and ground.

Henry’s Honeysuckle produces slender dark-green leaves that curl themselves in strong winters. Although the plant is evergreen in nature, it might act as semi-green in some regions with harsh winters. The leaves will then drop in winter and emerge again in spring.

It blooms two-lipped yellow flowers that are flushed with red in summer, followed by purple berries in autumn. The flowers look moderately ornamental and attract a lot of wildlife during the season.

Lonicera Honeysuckle thrives in full sun or semi-shady spots but dislikes full shade as the leaves in the lower plant will start fading excessively. Plant it in a humus-rich soil that is moist and well-drained. It prefers its roots in shade and the head in the sun.

Henry’s Honeysuckle is a hardy climber that can withstand exposed locations. Because of its vigorous growth habit, it might need occasional maintenance. In spring, cut overgrown stems to the base to encourage new branches. Prune accordingly to give it the desired shape but it is best to leave Honeysuckle vine to grow it on its own.

Honeysuckle makes a great groundcover and can climb old tree trunks or walls. You can train it on a trellis or along a wall side. It is suitable for coastal garden and woodland garden.

Be the first to review Lonicera henryi Henrys Honeysuckle. Write a review