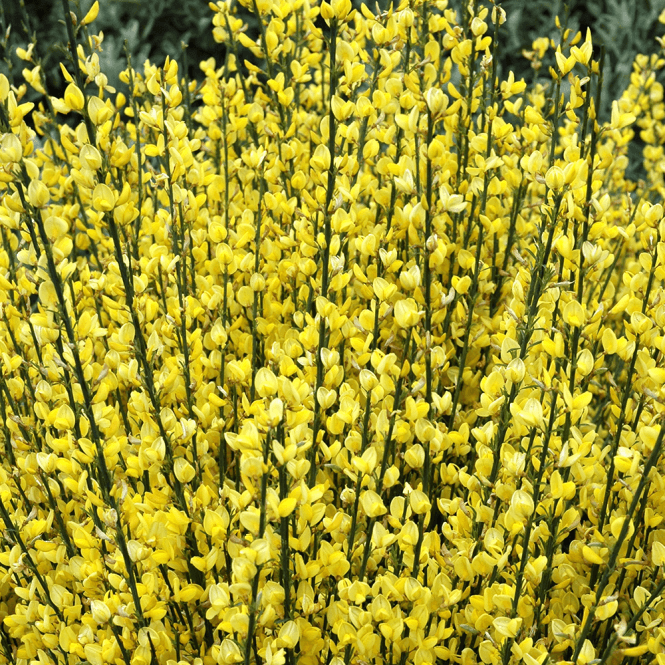 Characteristics: A deciduous perennial with small green leaves, which decrease in number as it ages.

Growth & Spread: Fast grower, which will reach a total height and spread of 1.5 to 2 m.

Water & Maintenance: During the first year, make sure to water regularly and plant with fertilizing organic material. It is relatively low-maintenance plant.

The Cytisus is a variety of plant with longer stalks that hold thin green leaves of about 2 cm in length. During blooming, these stalks are filled with golden flowers that stretch the length of the branches.

The flowers appear on stalks and branches of a beautiful deep-green colour. The flowers form in pea-like shapes and attract a number of pollinators.

This plant prefers more acidic soils and full sunlight. In order to get the most out of this plant it is also suggested that after the flowering season, the plant should have new growth pruned back, a recommended 20-50% of the branches. They should be trimmed early and with regularity every year, so that the older woodier growth is not cut in later pruning.

They also prefer well-drained soils and can be put in positions where they are more exposed to the elements.  In addition, they are hardy plants and can endure most freezing temperatures.

After being established, they are relatively drought-resistant and good to use as accents in decorative rock garden areas, in medium-sized flower beds and in dry hillside areas as a landscaping plant. They are also relatively disease- and pest-free.