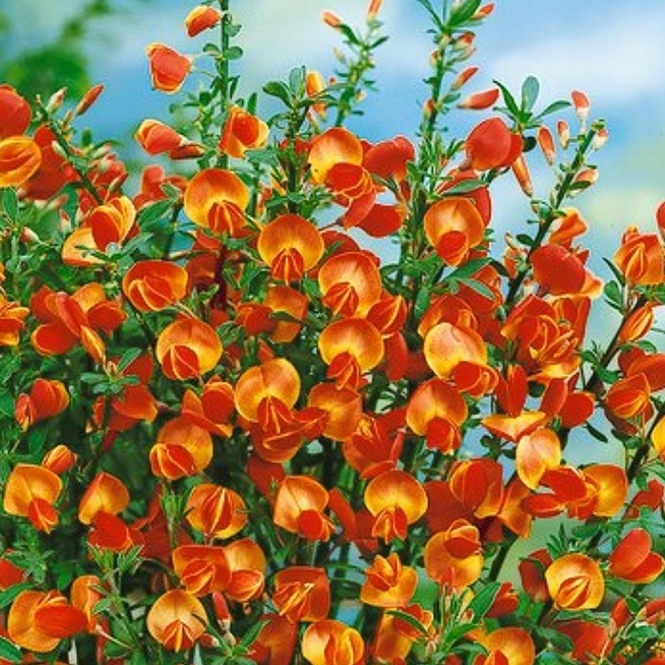 Flourishing Season: May and June are the flowering months.

Water & Maintenance: Water well while it becomes established, after which it is a hardy species.

The “Lena” is an evergreen perennial. It is tolerant of many soil types and can grow in poor soil areas, however it prefers full sun.

The leaves are relatively small and palmate. In older plants the narrow and short green leaves may be noticeably reduced in number.

The blooms on this plant are of a pea-shaped variety and the colours are spectacular. In addition, they have a delightful fragrance. Depending on the amount of sun and weather, the flowers open in the months of May and June.

Like other similar Cytisus plants, it should be cut back after flowering, with anywhere from 20% to 50% of the new growth removed in order to encourage vigorous blooming the following season.

They are a favorite of some of the pollinators, especially bees. And they are mostly disease and pest free.

This varietal has a shorter height than other similar shrubs, but satisfactory broom growth.

And thus are good to use in areas where a lower canopy is desired, like in an informal garden or flower border.

Showing our 2 Cytisus Lena Broom Compact Deciduous Shrub reviews with an average rating of Excellent. Would you like to write a review?
Review Summary - 5 out of 5 based on 2 ratings.
March 12, 2022 | Carmita Guimarães
Healthy plant.

Just received my plant today, very well packed and intact. Small shoots are coming already so I've replace to a bigger pot and placed outside in the garden hopefully I can see leaves coming very soon. I will update my review when I'll see any more improvements . Thanks

Promptly received in perfect condition and planted out yesterday. All this rain should hopefully give it a good start! Very happy with my purchase, thank you :)