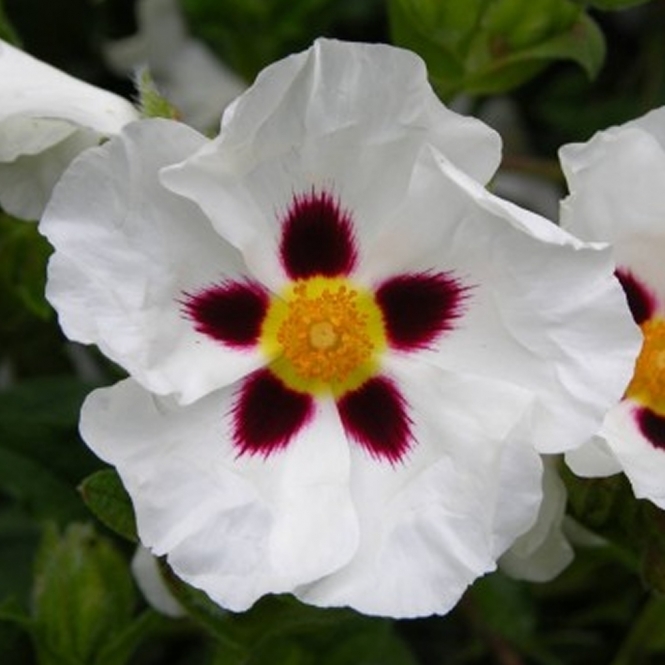 Characteristics: Hardy and dense, evergreen plant with a spreading habit. It is also drought tolerant.

Flourishing Season: During the summer months, beautiful crisp white petals, each with a splash of maroon towards the center with contrasting yellow stamens.

Water & Maintenance: Water until established during the first year. Otherwise, it is a very low maintenance plant.

This plant is evergreen and has clean white flowers with maroon-coloured, triangular shapes towards the center of each petal. The flowers are approximately 6 cm in diameter. These magnificent flowers appear regularly during the summer months.

It is a dense, rounded shrub that is relatively low-spreading and only requires minimal amounts of pruning to remove seed heads. In fact, they prefer lighter pruning after flowering or before growth in the spring time. They have smaller lanceolate-shaped green leaves and prefer full sun in sheltered areas.

They are often known as Rockroses because they can grow in a variety of soils, including very poor ones and tolerate drought once established. They are also tolerant of winter temperatures down to -10⁰ C.

As they are drought tolerant, they work very well as ground cover in drier patches along embankments, slopes and other areas like borders and flower beds. They are also very attractive in cottage gardens and work well in smaller city gardens or in courtyards.