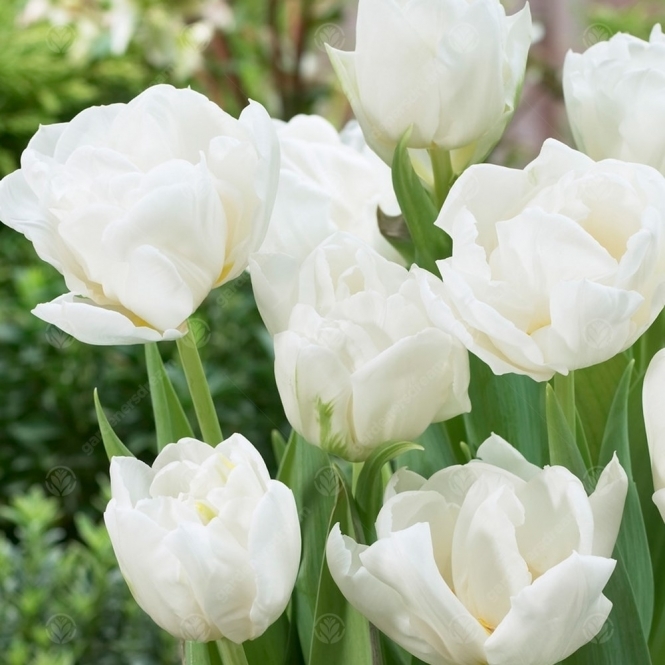 Mondial is a division 2, Double Early Tulip with large, white blooms born on short stems. Peony-like blooms that are arranged in a tight cluster with a seemingly endless amount of white, fluffy petals.

Waken the garden in white, Mondial usually arrives after some of the earliest tulips, but will light up the garden with their charming blooms. Plant in groups in beds and borders for a striking effect or use in a pot or container for more modest blooming. Excellent and elegant cut flowers to use in a vase or flower arrangements

Tulips (Tulipa) are one of the most prevalent herbaceous bulbiferous geophytes, a plant which dies and stores energy for future growth in an underground bulb. Tulips are generally very easy to grow and as such are common spring flowers. Tulips come in a variety of shapes and size and do well in a variety of garden scenarios including flowerbeds, patio pots/containers and garden borders. Tulips are also well-known for cut flower arrangements and decorative displays.

Tulip flowers will generally thrive and return yearly, although the quality of their beauty may diminish after time. They are perennial and will most likely return year after year. Centuries of cultivation have created a dazzling array of hybrids with the full spectrum of the rainbow available.

How to grow tulips - Plant tulip bulbs in the fall season, approximately 6-8 weeks before a frost, in neutral to alkaline, fertile soil about 10-15cm apart with as much sunlight as possible, but ensure they are sheltered from strong winds. Plant the bulbs 3-4 times the diameter of the bulb, this usually is within the range of 7 to 20 cm. Please note, the bulbs should not be exposed on the surface.

How to care for tulips after the bloom – Deadhead the blooms after they begin to fade, keep the leaves until they have discoloured and faded. As leaves are producing energy for the bulb, ensure that the leaves finish the growing cycle which in turn will produce strong, good bulbs for the following season.

Due to hybridization, many plants will fade in their blooms if grown year after year, this often occurs after the second or third season. Tulips should not be grown in the same soil for several years, so replace with fresh soil every other year

Be the first to review Tulips Mondial. Write a review