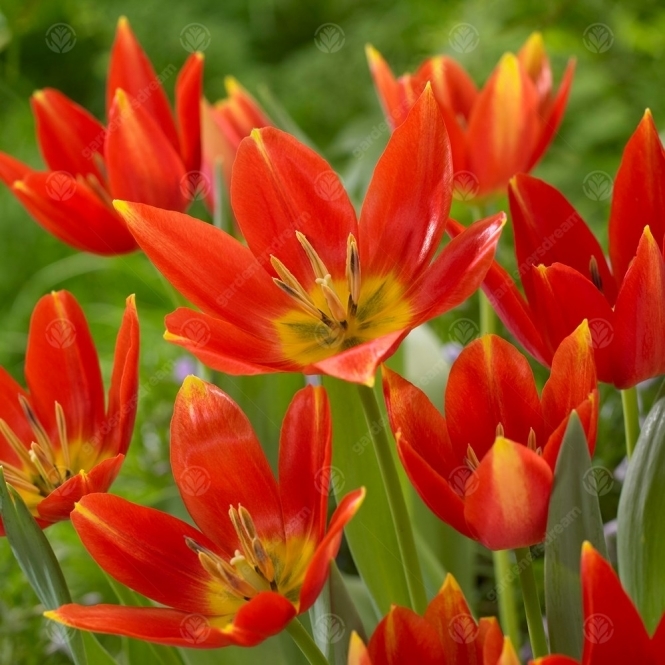 Dancing Fairy is a division 15, Species Tulip with a lot of bright red colour on a cup-shaped flowerhead and the central rib of each petal is varyingly brushed with a golden orange colour.

Strong-stemmed and stout, Dancing Fairy will be a delight planted in the garden in rockeries, edging and at the front of beds. Plant in groups or allow to naturalise for a dazzling colour effect or mix with other similar statured flowers.

Species Tulips are also commonly known as Botanical Tulips and share some characteristics with their hybrid relatives, but they also exhibit distinct characteristics which Tulip collectors and enthusiasts have admired for a long time.

Tulips (Tulipa) are one of the most prevalent herbaceous bulbiferous geophytes, a plant which dies and stores energy for future growth in an underground bulb. Species Tulips have some qualities that they share, but other qualities that also differentiate them from hybrid tulips.

Botanical Tulips share the trait that they are generally are easy to grow, however, they are spring flowers with a more varied and longer flowering time than Hybrid Tulips. Species Tulips are typically, shorter and smaller than hybrid tulips and have bladed, grass-like foliage. Most are good perennials returning year after year with similar blooms and with an inclination to naturalise. Flowerheads will often appear throughout the spring time blooming period, but do not last as long as the thicker petalled hybrid varieties.

Diversity of blooms is another trait of Species Tulips, often exhibiting a range of traits including reflexed, curled, frilled petals and visually interesting combinations of these traits along with dramatic and varied colours.

How to grow Species Tulips - Plant tulip bulbs in the fall season, approximately 6-8 weeks before a frost, generally tolerant of acidic, neutral and alkaline soils. Ensure fertile soil that is well-drained, and plants are about 10-15cm apart with as much sunlight as possible. Well-drained soils are especially important as Botanical Tulips developed in drier regions and are accustomed to this in their native habitats. Plant the bulbs 3-4 times the diameter of the bulb, this usually is within the range of 7 to 20 cm. Please note, the bulbs should not be exposed on the surface.

How to care for Botanical Tulips after the bloom – Unlike hybrid tulips, avoid deadheading the blooms after they begin to fade, keep the plant whole and allow to follow the natural cycle for perennial blooms. Most plants are small and fragile, and the energy cycle will be greatly disrupted by removing flowerheads and foliage and increase the exposure to disease and pests.

Be the first to review Tulips Dancing Fairy. Write a review