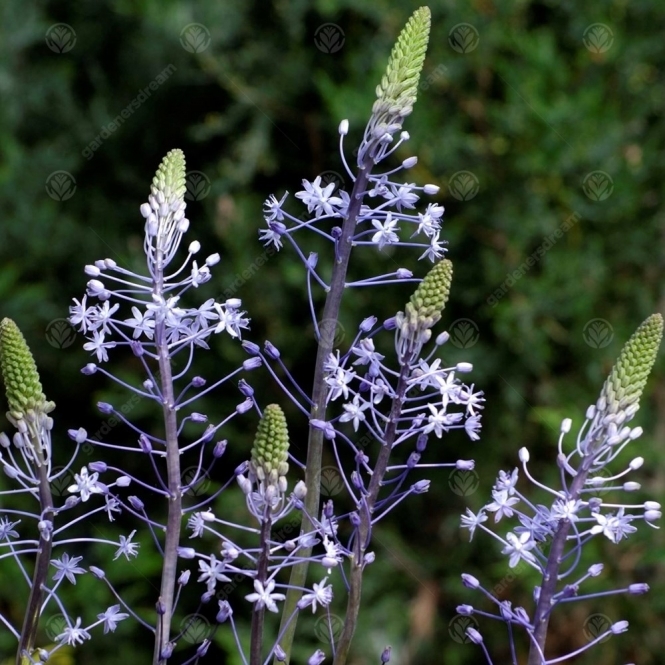 Scilla Hyacinthoides Blue Arrow is a towering ornamental flowering plant that produces over 100 pale lavender blooms in racemes on tall stalks with a minimum amount of basal foliage. Flowerheads are star-shaped and reach outwards on delicate pedicles from the plant’s main stem

Mighty decorative plant native to the Middle East, Scilla Hyacinthoides Blue Arrow has multitudes of delicate flowers that respond to sun and heat. Ensure that the plants are in the best draining soils and hottest places in the garden. Great for naturalizing open woodland and informal garden areas, can also be used well in bed and border planting.

Scilla Hyacinthoides is a tall variety of ornamental plant with origins in the Middle East and a part of the Asparagaceae Family, related to Asparagus. Clump-forming perennial that appreciates hot and sunny places in the garden. Star-shaped flowers are typically produced in shades of blue, with some varietals exhibiting more violet, white or pink colours.

Tall stems or stalks form with racemes that produce multiple flowers, often large numbers of blooms, that are characterized by long pedicels that extend the flowerheads away from the central raceme. Typically, flowerheads open from the lower portion of the raceme, growing outwards and opening up as the season goes along.

Plant Scilla Hyacinthoides in well-drained, gritty soils that receive plentiful amounts of sun and heat. As a native to the Middle East, heat triggers the plant to produce and flourish. Excellent for rockery planting and in rougher areas of gardens with stony soils. Clump-forming, Scilla Hyacinthoides will produce a number of bulbs or offshoots from the main bulb.

Ornamental plants that are good for planting as highlights in an area of a garden or informal garden setting. Tall stems or spike-like racemes carry numerous flowerheads skyward with some plants reaching heights of over 1m. During growth, regularly water Scilla Hyacinthoides, but avoid over-watering. With minimal amounts of basal foliage, allow the leaves to die back down after the flowering season in order to allow restorative energy gathering for the bulbs and future perennial growth.

Be the first to review Scilla Hyacinthoides Blue Arrow. Write a review