This site uses cookies to provide and improve your shopping experience. By continuing to use this site, you agree to accept these cookies.
For more information, please see our Cookies Page
More Info
Ok
Covid-19 : Click here to read our latest delivery updates
Free Standard UK Delivery On All Orders
Express Next Day Delivery Is Available
Join Our 'Gardeners Club' Free For Great Offers 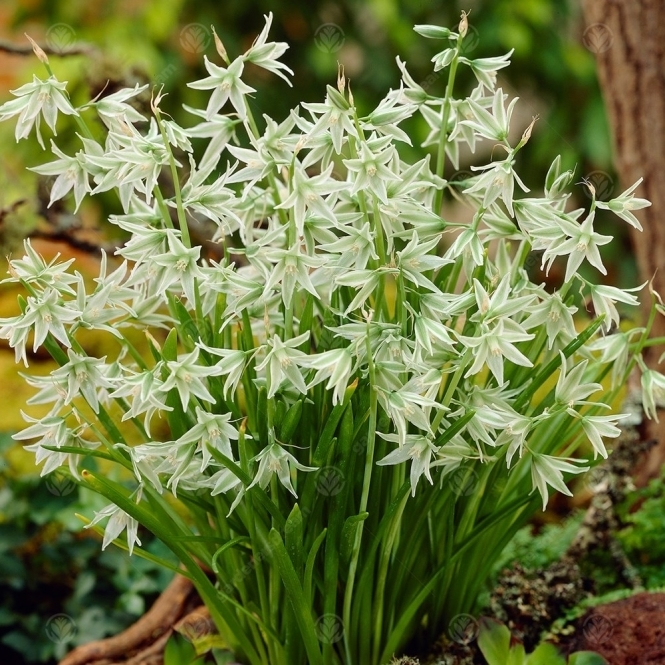 White and Green Drooping Star of Bethlehem Bulbs
Item in Stock Item out of Stock | Usually dispatched within 24 hours
Loading...

Ornithogalum Nutans or the Drooping Star of Bethlehem has spikes or stems bearing up to 12-15 nodding blooms that are irregularly spaced. Flowerheads have petals with a broad, pale-green stripe with silvery white margins and the basal foliage is narrow, strap-shaped with a silvery stripe running the length of the centre.

Scented and hardy, Ornithogalum Nutans is a distinct, spring-blooming flower that produces wonderfully shaped and coloured blooms. Plant at the front of mixed borders for excellent sights or use for naturalising woodland or meadow slopes and plains. Can also be grown in pots and containers for decorative planting along walkways or patio areas. Known for being a fantastic cut flower as its blooms last for a lengthy period of time.

Ornithogalum is native to Europe, Southern Africa and Southwest Asia and belong in the Asparagacae family. Ornithogalum are hardy plants that average 30cm in height and usually have several bunches of star-shaped flowers and are commonly called the “Star of Bethlehem” because of its flower shape. Flowers usually appear in the mid to late spring.

Ornithogalum are bulbous perennial geophytes that produce numerous blooms on tall stalks and are frequently coloured green. More colourful and ornamental varieties have been adapted for garden and landscape planting. Ornithogalum are also good for using in pots and containers and used in areas of mixed borders and underplanting around deciduous shrubs and trees.

Plant Ornithogalum approximately 8-10cm deep and about 15cm apart in well-drained soils that are fertile and in mostly sunny areas, some varieties are tolerant of dappled shade. Great for naturalising woodland garden areas, once established, Ornithogalum is very adept at spreading via offshoots and occasionally by seed.

Noted for being excellent cut flowers for their longevity, Ornithogalum are durable plants that show little to no effect from having flower stems harvested. Foliage should be allowed to die back later in the summer as this is a critical component of the cycle of energy storage in the bulb for future plant growth and blooming.

Be the first to review Ornithogalum Nutans. Write a review