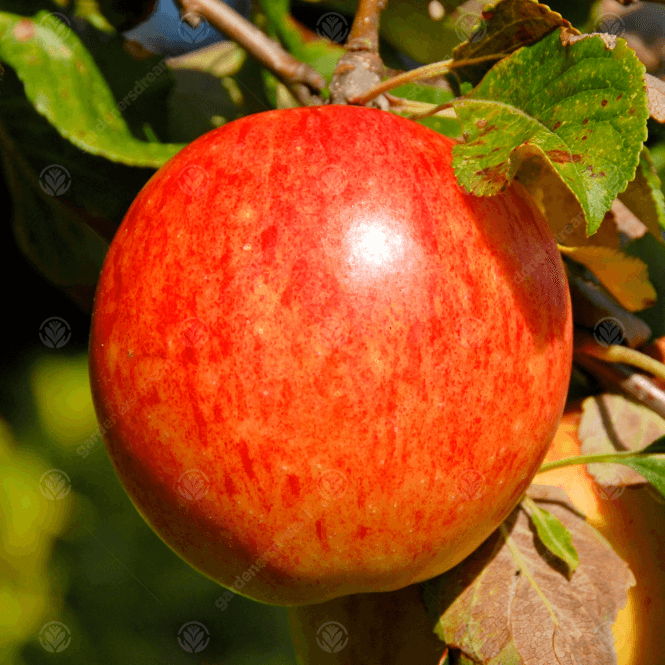 Apple James Grieve is a fabulous dual purpose apple. If you pick the apples straight from the tree in early September, they are juicy and tangy. Leave them longer, until October and they become much sweeter. Take your pick! The fruit has a lovely orange-red skin, tinged with yellow speckles giving it a flushed look. The flesh is not crisp but can rather be likened to the consistency of a pear.

Malus domestica 'James Grieve' apples are perfect for cooking. They hold their shape and can be offered as baked apples or in a pie or tart. Try your hand at a a sticky upside down apple cake served with custard – great for an evening at home with friend and family. The unique taste also lends itself to eating with a variety of cheeses.

This tree originated from Edinburgh, Scotland in 1893 and is ideal for the more difficult northern areas and less favourable sites. Plant in fertile, well-drained soil in a sunny open site. It requires another tree of the same flowering group for pollination. The 'Jonagold' will be a great choice.

We offer the Malus domestica 'James Grieve' as a rootstock MM106, semi-dwarfing, which is tolerant of a range of soils including grassed orchards and poor soils. This is the most widely used rootstock. Plant with a spacing of 4.5m between the rows for best results. When left unpruned it will reach heights of 4-5m in a 10 year period. This delightful tree holds an RHS Award of Garden Merit.

M27 (Extremely Dwarfing) are suitable to grow in small gardens where the soil is fertile. Plant in weed & soil-free grass and water during hot seasons. The tree will start fruiting after two years with an ultimate height of around 1 - 2m.

Be the first to review James Grieve Apple Tree. Write a review