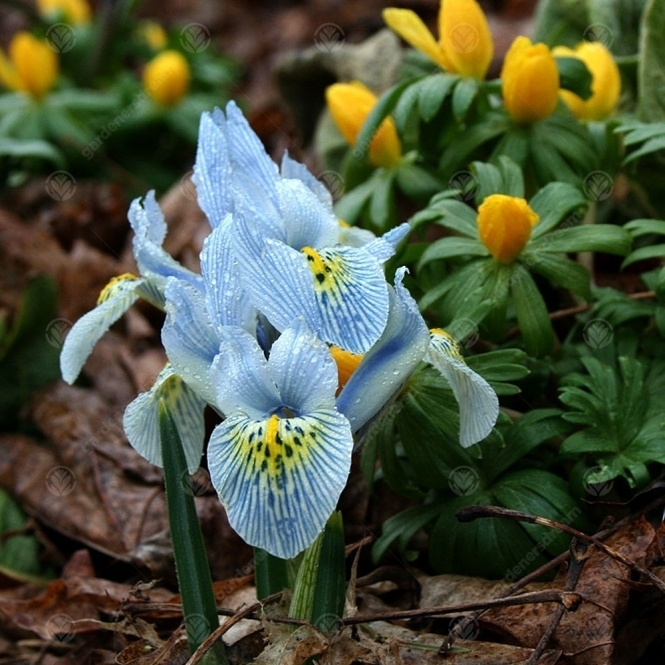 Iris Dwarf Katharine Hodgkin has single blooms with very unique colourations. Exterior sepals or falls are coloured with grey- blue streaking or veining towards the margins and spotted towards the centre. Each sepal has a central golden yellow spot. Interior petals or standards have deep blue veining on a pale petal that appears almost translucent and feather-like. Accompanied by slender four-sided mid-green leaves.

Unique colours on a hardy and fragrant flowerhead, Iris Dwarf Katharine Hodgkin produces unique blooms that seemingly belong in a tropical aquarium. Wonderous colourations to announce the end of winter and the arrival of spring. Plant at the fronts of beds or borders and ideal for planting in pots, containers or in window boxes and can be used as a cut flower for bouquets and arrangements.

Two of the most popular and well-known Iris varieties are composed of dwarf varietals (Iris Dwarf) and Dutch Irises (Iris hollandica). Dwarf Irises begin the season of flowering Iris in February and March and the Dutch Iris varieties bloom towards the beginning of summer around June. Iris are favoured ornamental flowering plants that present a rainbow of colours and distinct differences in their bloom structure

Dwarf Irises are inclined to naturalise areas and are clump-forming. Dutch Iris are often thought of flowering blooms used with the intention of cut flowers and have more grass-like foliage. Dwarf and Dutch Irises species grow from a bulb and while similar to a bulb, other varieties of Iris are grown from a rhizome.

Be the first to review Iris Katharine Hodgkin. Write a review