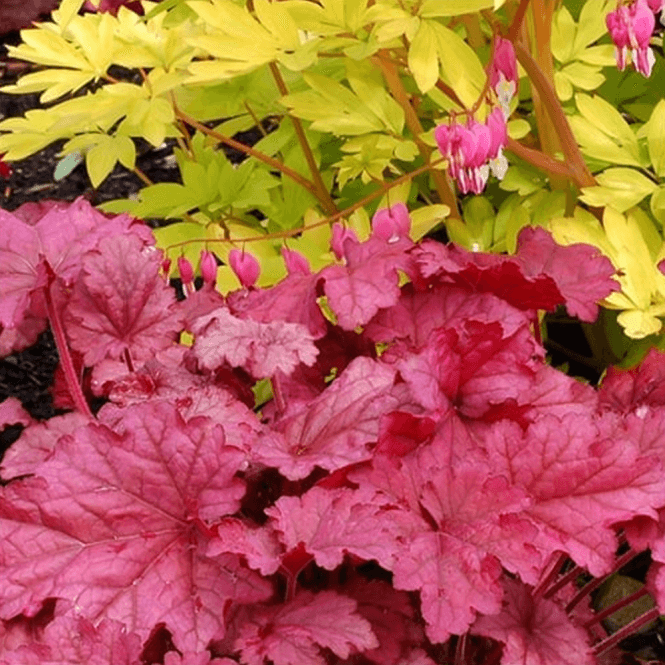 • Water & Maintenance: Once established, plant will need little to moderate maintenance. It is however appreciated for its drought and heat resistance.
• Growth & Spread: A medium rate grower. Average height is around 40 to 70 cm with a spread of 30 to 50 cm.
• Flourishing Season: Late spring to early summer flowering
• Characteristics: Large-lobed leaves with raspberry pink leaves changing to bright purple later in the season.
• Pot Size (Supplied): 9cm

They present wonderful hues of deeper pinks and purples throughout the year. During their blooming period in the late spring to early summer, white tubular flowers appear on thin, long stalks throughout the plant area. These groupings of buds and blooms appear on the upper-most portions of the racemes and are surrounded by calyces similar to that of the leaf color.

These varieties of plants are evergreen perennials in certain climates, while they may not be evergreen in colder conditions.

This plant does well in most soil types and prefers in general drier conditions, rather than moist soils. As such, they do really well in planters and tubs where they are allowed to show off their colorful hues.

Because of their drought tolerance, they also do well in more decorative rock gardens and other border areas. Also, good to mix in beds or tubs with other varieties of Heuchera for contrasting leaf designs and colour schemes.

Many of these types of plants are resistant against a variety of larger garden predators. And as such, can do well as an ornamental, landscaping plant.