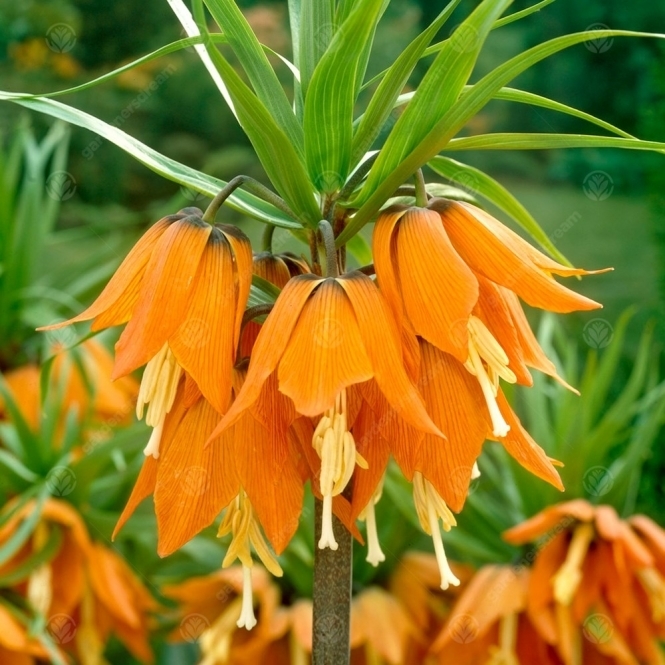 Fritillaria Imperialis Aurora has lanceolate leaves towards the base out of which rises a sturdy stalk and bear the flowerheads skyward. Along the stalk the leaves continue to be regularly spaced with the uppermost portion of the stalk bare except for the impressive crown display on top. Several golden orange to red, bell-shaped flowers nodding perch on top of the stalk with thinner, lanceolate leaves on the very top completing the crown.

Hardy and Tall, Fritillaria Imperialis Aurora are exciting blooms to plant in the garden and will do well in most moist and well-drained soils. Plant towards the backs of beds and borders or use in woodland gardens or meadow areas for accent effects, will naturalise and increase over time. Can be used as a cut flower in interesting arrangements and vase displays

Fritillaria are herbaceous perennial plants that grow from a bulb and in in the lily family, Liliaceae. Fritillaria are noted for several distinct attributes including single, nodding bell-shaped flowers. Some of the species has only single blooms while other varietals have racemes with multiple flowers. One of the odder characteristics of some of the plants within the Fritillaria genus is a distinct and unpleasant odour

Uniquely beautiful and varied in their appearance and colourations, Fritillaria offer some of ornamental plants’ most complex designs and colours in their flowerheads. Heirloom varieties have been grown for centuries because of their attractive beauty and fantastic blooms.

Fritillaria can vary with preferences for areas with full sun to planting in shade gardens. Plant in fertile, well-drained soils. Plant bulbs with the tip side of the bulb facing upwards and root-side downwards at depths of 5-8cm with some depth variations for larger bulbs.

Fritillaria should be planted in the autumn or fall and regularly watered to ensure root growth before winter, followed with spring flowering. While Fritillaria make excellent cut flowers, this will likely impact the following year’s flower production. After blooming, allow foliage to die back own its own as this is a critical stage of the growth cycle restoring energy to the bulb for the following season’s growth and blooms

Be the first to review Fritillaria Imperialis Aurora. Write a review