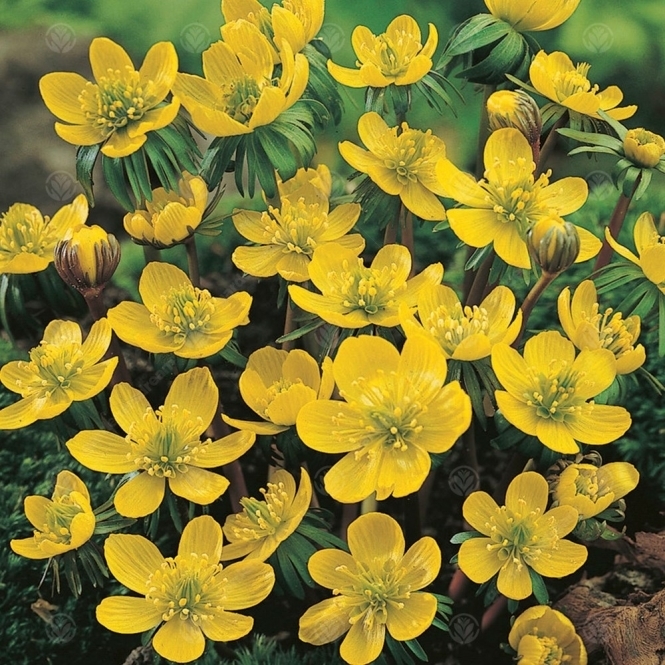 Breath-taking beauty that improves yearly, Eranthis Cilicica left in areas to grow will return in the following years more and better blooms. Great for growing in woodland gardens and at the fronts of beds and borders or in pots and containers that are well-maintained.

Cilicica Group is a group with the Buttercup Family or Ranunculacae and Eranthis Cilicica has very similar plants that vary slightly in blooming time and the length of their stems. Eranthis Cilicica continues to be establish and is now more commonly known as part of the Cilicica Group. Variations of this family are found throughout the world, but mostly in the Northern Hemisphere

Large, golden orange flowerheads typifies these types of plants with most of the significant variations being in colouration and flower height. Leafy bracts form directly beneath the flowerhead and foliage is often finely dissected. Eranthis hyemalis is native to Europe and Eranthis Cilicia is native to Southern Turkey to Afghanistan.

Plant Eranthis in fertile soils, that are well-drained, but with maintained moisture and depending on the specific plant, can be used in full sun to more shaded areas. Grows by a tuber which should be soaked overnight and planted 5-8cm deep

Ideal for naturalising areas which are in accordance with their growing requirements, especially under trees or bushes, Eranthis will spread and provide plentiful golden yellow blooms in the early spring time. Tubers of Eranthis that are left alone will flourish over time and spread out in woodland garden settings. More sun is needed during the bloom time to ensure plant blooming and growth, but then it is necessary to avoid extreme heat, which makes the plant perfect for areas which will later be covered by a leaf canopy from taller trees and plants.

Be the first to review Eranthis Cilicica. Write a review