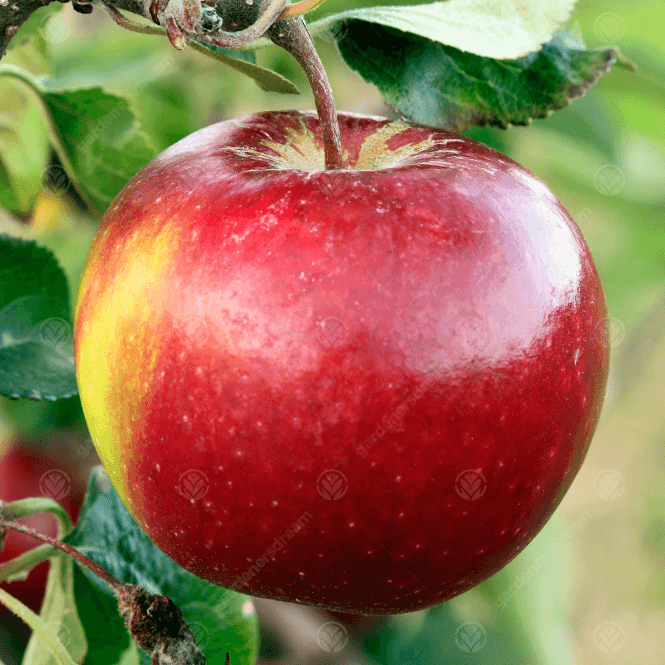 Be inspired by the beauty of an apple tree in your garden, just as Sir Isaac Newton was when he discovered universal gravitation as an apple fell from his favourite tree!

Admire the round apples, golden in colour with red streaks decorating each one as if an artist themselves had painted them individually. When it comes to taste, these apples have the most glorious liquorice flavour that develops once they are picked, keeping their crisp but tender texture and juiciness.

During May, beautiful white and pink flowers appear interspersed between the large egg-shaped leaves. They are soft to the touch and fragrant on the nose.

Happiest in a sunny spot the Malus domestica 'Ellison's Orange' is offered as a rootstock MM106, semi-dwarfing, which is tolerant of a range of soils including grassed orchards and poor soils. This is the most widely used rootstock. Plant with a spacing of 4.5m between the rows for best results. When left unpruned it will reach heights of 4-5m in a 10 year period. To ensure cross-pollination, plant the Ellison’s Orange Apple Tree near to a tree that has the same flowering group.

Plant the wonderful Malus domestica 'Ellison's Orange' tree as the first step to creating your own private orchard!

MM106 (Semi-Dwarfing) are suitable for all forms except standards. The apple trees are tolerant of various soils like grass orchards and poor soils. Widely used rootstock, but not for small gardens. This tree will begin fruiting after three or four years with an ultimate height of between 4-5m.

M26 (Dwarfing) are good for spindle bush, espalier and ideal for containers. Typically starts fruiting after two or three years with an ultimate height of between 3-3.5m.

Be the first to review 'Ellison's Orange' Apple Tree. Write a review