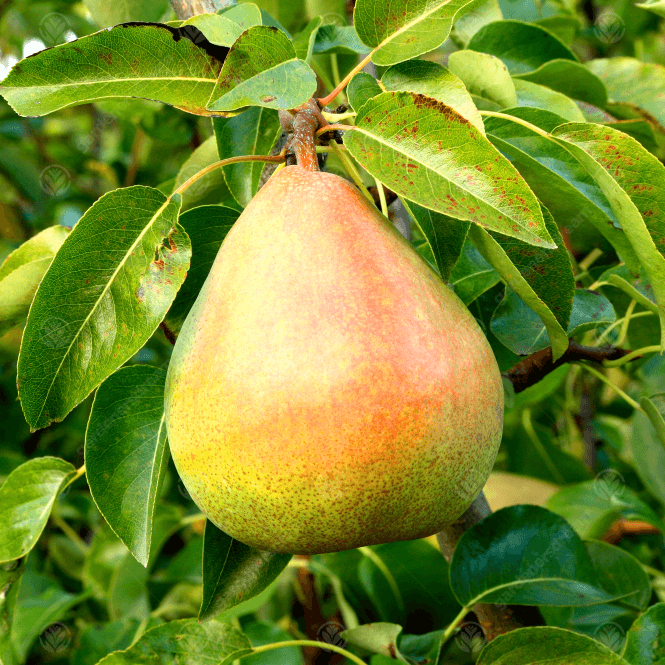 Comice Pear Tree (Dessert) produces a delicious rich and juicy pear, ideal for eating straight off the tree or for use in cooking. Add to an exotic salad or pair with blue cheese and Prosciutto. They are firm enough to be cooked and can be used to make scrumptious pear crumbles or roasted pears with chocolate sauce.

Pyrus communis 'Doyenne du Comice' has an upright habit and grows vigorously in fertile, well-drained soil. The fruit is plump with a medium to large size. Colouring is golden-yellow flushed with brownish red.

Your pear tree will produce loads of lovely white flowers in spring, which attract birds and butterflies, bringing movement and sound into your garden. The flowers mature into luscious fruits, ready for picking in mid October.

Comice Pear may not be as reliable with its crops as some of the other pear varieties, but pear lovers say that it is worth planting for its superior taste that earned it an RHS Award of Garden Merit. Its heritage stems from France in the 19th century. This tree requires a pollinating partner to be planted nearby, the Concorde is a good choice.

We offer Pyrus communis 'Doyenne du Comice' as a Quince A (semi-vigorous) rootstock. This is suitable for fans, cordons, bushes, central leaders, half-standards and espaliers. The tree will reach heights of 3-3.5m in a 10 year period if left unpruned.