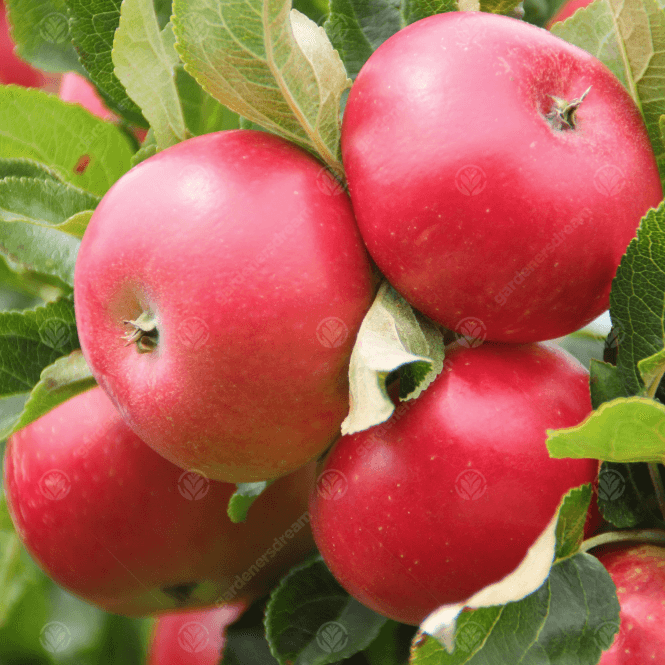 Malus domestica 'Discovery' is a delicious dessert apple with a smooth, bright crimson skin and a crunchy, pinkish, crisp flesh. It is juicy and has a sweet taste with a hint of strawberry flavour. This is your perfect off-the-tree eating apple and is a great favourite with children.

Apple Discovery trees produce heavy crops of fruit earlier in the season and are ready for picking as soon as August. The fruits keep well and can be stored for several weeks after picking.

Plant your Apple Discovery in fertile, well-drained soil in a sunny area. It does need to be cross-pollinated by another another tree from the same flowering group. The Arthur Turner makes a good partner.

Your Apple Discovery is a tough tree and will thrive well in the northern regions and more difficult areas. It has an upright spreading habit and offers a lovely display of white cup-shaped flowers in mid to late spring.

Apple Discovery is offered as a rootstock M26, semi-dwarfing, which is tolerant of average soils including grassed orchards. M26 is ideal for containers and can be trained as a bush, pyramid, spindlebush, cordon and espalier. Plant with a spacing of 4.5m between the rows for best results. When left unpruned it will reach heights of 2.5-3m in a 10 year period.

This lovely Apple tree holds an RHS Award of Garden Merit. Its heritage stems from Essex in 1949.

Be the first to review 'Discovery' Apple Tree. Write a review