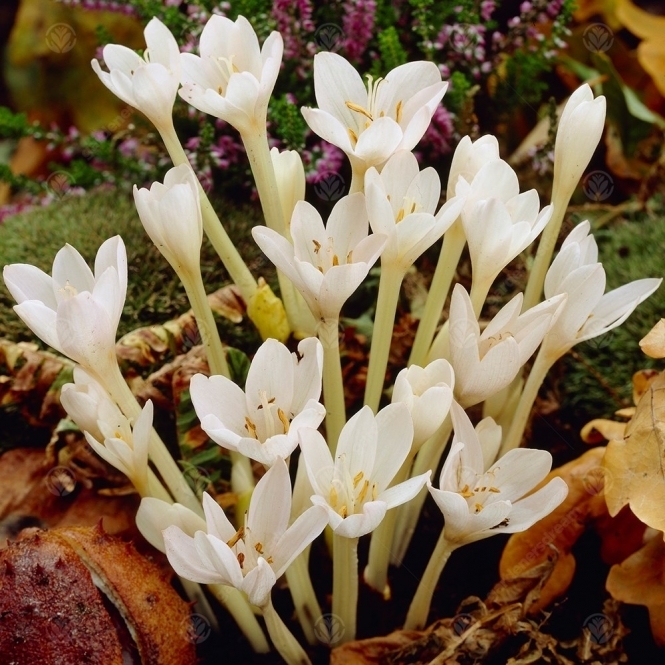 Colchicum Autumnale Album is autumn blooming flower with up to 30 flowerheads per corm or bulb-like root. Devoid of leaves during the flowering, elongated yellow-tinged white stems produce in large masses, cup-shaped, white-petalled flowers often with a slight pink hue towards the base.

Autumn blooming, Colchicum Autumnale Album presents its foliage in the spring season and left alone will naturalise an area. Can be grow in pots and containers and does well growing in borders and beds under shrubs or trees. Inedible - Toxic if ingested

Crocus announce that spring is coming and some of the earliest flowers to bloom. Crocus develop from a tuber called “corms”, the technical name for the flower bulb. Spring Crocus are some of the earliest blooms of the season and have been known to come out even when snow is still on the ground. Easter colours of the Crocus include a rainbow of rich lavender purples, showy pinks and golden yellow hues. Crocus leaves are generally green and strap or thick grass-like in appearance.

A smaller flowering plant, most Crocus blooms have average heights of 10 cm. Crocus flowers typically have a cup or goblet shape with variations of how open or closed the petals are. There are many species which are highly appreciated for their fragrance. The Royal Horticultural Society recognizes a significant number of Crocus for their positive characteristics of not only their beauty and fragrance, but also for their attractiveness to pollinators like bees and birds. One of the most famous Crocus varieties is Crocus Sativus, better known as Saffron Crocus, from which the stamen are harvested and used in cooking.

One of the most important aspects of planting Crocus is proper drainage. Due to their heritage of growth in mountainous areas, like the alps, Crocus can grow well in gritty soils that are only poor to moderately fertile. They will do well in fertile soils, but the critical aspect is that while the soil can be moist, is must not be water-laden or soggy. Crocus prefer areas with full sun to partial shade and will do poorly in completely shaded areas.

For best results, plant the Crocus bulbs 5 cm deep with the pointy part of the growth shoot upwards, make sure the plant is completely covered. Two main varieties of Crocus bloom in either the Spring or the Fall of Autumn. If it blooms in the fall, plant it in the spring and if it blooms in the spring, plant it in the fall. Crocus do well grown in groups and can naturalise an area over a series of season, eventually creating a wonderful blanket of blooms.

Be the first to review Crocus Colchicum Autumnale Album. Write a review